Lievre is a member of Blue Guardians' Six Guards. 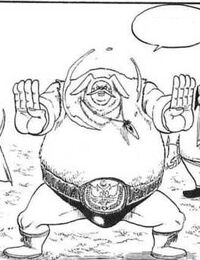 Lievre is a large, mustachioed man. He wears a hare costume, briefs with a pompom and boots.

Lievre is a perverted man. He also thinks that women are weak until Julia defeats him.

Lievre appears with all the others at the gate. After Leopard distracted Haru's gang, he blasts them all to Yuma's base. Then he fights Julia and thinks that she is really weak, thinking women in general are weak, but Julia proves the opposite and defeats him, breaking his neck. He later returns after being healed from his wounds only to be defeated by Haru with one single attack, breaking Lievre's neck again and destroying Lievre's Dark Bring. Lievre then faintly says to Haru where Hardner is.

Retrieved from "https://ravemaster.fandom.com/wiki/Lievre?oldid=30690"
Community content is available under CC-BY-SA unless otherwise noted.