Julia Line Dragoon, is a member of the Rave Warriors and the lover of Let Dahaka. She is a Sentinoid of the Dragon Race from the Mystic Realm.

Julia is a tall, slender young woman with brown eyes, an athletic build, and short, blonde, wavy hair that is parted to the left and has a beauty mark located on her lower lip. In later chapters, her hair becomes longer.

In her full Dragon form, Julia is mastodonic with four wings and is colored completely black. Her lower body, specifically her chin, chest, stomach, inner tail, thighs, and arms, are gray in color. Her has a triangular head with horns protruding from the back and a sharp horn pointing upwards just above her nose, yellow eyes and a purple gem over her forehead.

Some time after being turned back into her humanoid form, during the Ribeyla arc, Julia wore a brassier and sarong dress while hiding her face with a knight helmet and a pair of boots. Accessories include a braces on her upper arms, wrist bracelets and a scarf.

In The Final Battle arc, she wore a female wrestler outfit, consisting of a orange tank top with a black bar across her chest. Black sleeves covering her elbows and garter belt boots.[1]

Julia as a Dragon 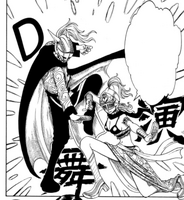 Let and Julia as the Dragon Dancers 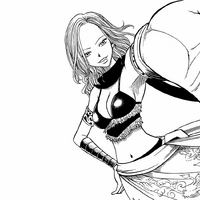 Julia is portrayed in Let's memories as loving and calm, but when she joins the group after being saved by Let, she is portrayed to be more aggressive. She is very strong, feisty, loyal, fun, and possessive of Let. Julia gets jealous and angry when seeing Let close with other girls. She doesn't like the humans in the group at first, but warms up to them; she becomes slightly protective of Elie, teams up with Musica several times, and when she learns why Let believes in Haru Glory as much as he does she finds she can cry in front of him even when she can't in front of anyone else in fear of showing weakness.

Julia grew up in the Mystic Realm with Let in the Dragon Race village. She was the only one approach a lonely Jegan and invited him to socialise with their friends. Over the years, Jegan had developed feelings for Julia and planned on confessing to after beating Let in a sparing match. While he was the victor, Jegan noticed Julia comforting Let, realising he lost his chance. When it came time for Julia to undergo the Dragon Trial, Jegan destroyed the temple. Unable to properly perform the trial, Julia fully turned into a Dragon which Jegan took full control of and destroyed their home. Jegan casted an illusion on Let to make him believe Julia had died instead.

Julia appears as a Jegan's mount as he appeared for the meeting of the Oracion Seis. After Sieg Hart was defeated by the Rave Warriors, Jegan used her to collect Reina and left.

Julia was used to transporting the Oracion Seis to Symphonia so they could kill Elie. Let tried to save her after he realized the dragon Jegan had is Julia. She had cried out to Let as he called her name while his body was turning into a tree.

As the group moves to collect the last Rave, Jegan attacks them. Let tells Haru and the others to find the final Rave while he fought off Jegan. Let attacks Jegan, but Jegan pushes him off the back of Julia (on which they were fighting) on to a stronger less precious dragon. The battle is leaning in Jegan's favor until Let uses his "Roar of the Dragon God" this technique exchanges his life for ultimate power. Let has the upper hand and defeated Jegan. Both Let and Jegan fall to the ocean below them. As this happens, Julia falls and slowly turns back into a human on the way down. Julia then kisses let and they find themselves on an island.

When a woman's bag was stolen and Lazenby starts to attack the thief, a masked Julia appears and blocks Lazenby's attack. Lazenby got angry but Julia points out that she is just saving a life for her partner, a masked Let, has already beaten up the criminal. Lazenby got angrier and challenges her to a dance showdown. They show off their dancing skills until Haru interrupts them. Julia then says that if Haru's group is going to participate in the dance contest, they will have no chance of winning because they, the Drake Rhapsody, will win it. When they started to argue, Branch joins it and Julia and Let then leave, saying it will be interesting.

After four days, the contest finally starts and Bony the Starfish shows the order of the contestants, revealing that they are contestants number 27.[2] Later, they perform and get a high score from the judges, taking the lead. When Elie started performing the Dancing Maiden's dance, both Julia and Let watch her in awe. The judges then announce the results and they both ended up getting the second place, saying that they lost fair and square.

Dragon Race Arts (竜人技 Ryuujin Waza): As a member of the Dragon Race, Julia uses Magic to preform Dragon based techniques and spells of different elements and incorporate it into her fighting style.

Hand-to-Hand Combatant: Julia is a skilled bare handed fighter, being able to take on opponents much larger than her. Julia's fighting style is comparable to wrestling moves.

These two are childhood lovers and they tend to be violent to each other (especially Julia hitting/kicking Let for every little thing), but they still love each other. They fell in love in their childhood, so it is quite a long relationship.

She is like an older sister to Musica and watches out for him. They also like to tease Haru and Elie as a team. These two worked together to forced Haru to confess his feelings towards Elie on the night before the battle.[3]

Jegan was in love with her since an early age and does everything to win her love, though he is always overshadowed by Let. He got so jealous of Let to the point that he made each other believe that they died. He then forced Julia to take a Dragon Trial but she failed and was turned into a dragon. She served as Jegan's ride until Let turned her back to her human form.

Fairies at the Beach

Julia appeared along with her friends Ruby, Elie, Musica, Belnika and Griff at the beach.

The anime adaptation of the one-shot crossover, Julia has a bigger role in this OVA, she and Let assist Wendy Marvell and Carla against Koladoa's coin monsters.

In Mashima's Fairy Tail, Julia appears in Chapter 47, page 20 dressed in a bunny suit on the top standing next to Let.[4]

In Mashina's Hero's, she appeared alongside Let on Oasis where she fought Natsu Dragneel and the Demon King of Edens Zero, Shiki.

Community content is available under CC-BY-SA unless otherwise noted.
Advertisement